When he left after 10 years, he took all the alcohol and the knives, but forgot his pillow and blanket. Sometimes we leave in a rush and forget what’s important. But the symbolism was not lost on me.
﻿﻿﻿﻿﻿﻿﻿﻿﻿﻿﻿﻿﻿﻿﻿﻿﻿﻿﻿﻿﻿﻿﻿﻿
I lived a knife-less life for quite a while. (Since I don’t cook or eat much, this did not pose a significant problem.) Thankfully I was warm and cozy, surrounded by the multitudes of plush blankets and pillows he left behind. Which, incidentally, were still somewhat ineffective at keeping out the cold drafts of divorce.﻿
﻿ ﻿
﻿

There is much you can do without knives. But we must also consider that knives were some of the first crude implements used by humankind. So to go backwards and remove knives from our lives is like going back 20,000 years ago. When I cooked, I bit, tore and ravaged…but still I refrained from buying knives. This is because I’m incredibly frugal. Also known simply as “cheap.” Not a common quality in most seasoned wives, you will note.
﻿﻿
My philosophy has always been to get by with as little as possible to get the job done. But accumulation of possessions is an inevitable byproduct of being married with children in contemporary American society. And a fancy knife set is no exception. Ours may have been a wedding gift. The actual source is not sticking in my mind, despite my incredible memory. But he felt entitled to them, as entitlement is a theme here, so he took them when he left.
﻿﻿As a stunning distraction, I dated a sought-after co-worker to get me through the very worst dark days of divorce drama. Some might postulate that dating is not a solution, but rather a problem in itself. You hear maxims like “too soon” or “not ready,” but only the dateless really know when is when. The relationship served its very necessary purpose: intellectual and physical companionship, wine-tasting and cooking. Generic, yet very essential qualities (the guy that bolted with the knives and alcohol was a splendid cook as well; just not a splendid husband). And this new guy cooked, begrudgingly, with no knives.
Things accelerated when he bought me a toothbrush on our second date to leave at his place. But as usual, I chose to blissfully ignore any and all warning signs, and proceeded headlong into relationship oblivion. Fortunately, he had the wherewithal to recognize his self-professed "destructive patterns surrounding love and relationships." His newfound realization caused him to suddenly freak out and terminate us on Valentine’s Day, VD. VD can kill the love…it’s all timing, right?
﻿﻿﻿﻿﻿﻿﻿﻿﻿﻿﻿﻿﻿﻿﻿﻿﻿﻿﻿﻿﻿﻿﻿﻿﻿﻿﻿﻿
Dumped twice now. Ten fateful days after VD, on this cold, blustery, rainy Friday night that coincides with my 42nd birthday, a package arrived (did I mention his amazon.com addiction?). Despite my weather and relationship-induced depression, I opened the package. It started and ended with knives.
“I know you didn’t plan on (or want to) do as much cooking as you’re doing now. But if you’re gonna do it, you should be properly equipped. I hope you enjoy them.” Well, happy birthday. A really nice, new, expensive set of knives. OK…I’ll take it.
When you have nothing, a little means a lot.
Posted by Dating Suburban at 9:55 PM No comments:

On New Year’s Eve an interesting scenario was going on in my house. I was alone. Well, actually, my mother was sleeping in the next room. Although it was the first time in 10 years I had enough social energy to go out, I was still, involuntarily, dateless.
New Year’s is always a time of reflection, and debauchery. I remember ringing it in before marriage in Barbados, Boston and on a boat. I remember during marriage going to a party crying because I had to fire an au pair, and consequently had no childcare for my 3 warriors, I mean children, with my return to work looming in less than 24 hours.
Tonight, at the stroke of 12, when I should have been getting passionately kissed (thankfully Mom was asleep), instead I was on the computer. FaceBook timesuck. When you have nothing better to do…FaceBook.
An e-mail popped in from wasbund ex husband (my new way to insult people is to not capitalize their names if they are not important enough to warrant being a proper noun). What a surprise. Some casual, friendly banter. How…almost…fun. Considering we have never had an even remotely civil conversation before or since. He was home, apparently drinking alone, with my children tucked cozily on their cots in his shack.
Flip over to smartphone. Boyfriend of the time, Knives, is responding to my text. Yes, he went to an artist’s party. No, I wasn’t invited. No, he didn’t think I’d want to drive that far. No, he didn’t really miss me. Miss me, miss me, now you gotta kiss me. Too bad for me on that one. (Even mistletoe has lost its potency these days.)
﻿ ﻿
So what’s wrong with this picture? Friendly banter from hateful husband. Big blowoff from boyfriend. And both happening at the same time. Luckily I had not drunken (I’m not drunk!) enough of my cocktail to cross wires in messaging with these two clowns. But it was close. I was balancing two opposing forces, two opposing worlds, precariously in my hands.
Out with the old, in with the new. A harbinger for the New Year.

Posted by Dating Suburban at 7:36 PM No comments:

Dating Suburban Released Into the Wild

After I got married, I never wanted to be single again. Especially in suburbia. With 3 kids. However, my life has deviated from the blueprints. Drastically. 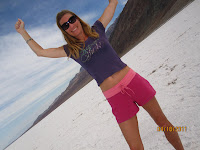 So here I am…Dating Suburban. I have some juicy tales to tell. These tales may make you wish to join me in the suburban dating scene, behind the exciting veil of domesticated suburban single life. Or at the very least my tales will entertain you...while reminding you to be so very thankful for the life you have.
Come, follow me…while I go Dating Suburban.
Posted by Dating Suburban at 10:24 PM No comments: