Triple dates are starting to become a regular occurrence in my life. This is when my Agent arranges a date for me, and the date doesn’t show up. This is an epic fail, but I’m not sure whether to give the “F” to Agent or the NoShow Dates.

Trip Dates are awesome, and I want them to become more regular occurrences in my life. This is when Dating Suburban (me) takes a trip with someone who may or may not consider the trip a date, even if I do.

And this weekend I got to do both: a Triple Trip Date!!!

Since I am still spinning from the side effects of divorce, trying to fill my time without kids is…surreal. Suddenly I’ve been catapulted back into the singles scene. I have free time. But I feel hopelessly lost when I don’t have the structure of kids who need me. Thankfully other divorced friends know exactly how it feels, and are there to rescue me almost every time. It’s not where I thought I’d be, but I make the best of it. Like Sophie’s Choice (except she drinks herself to death - I'm not quite there yet). 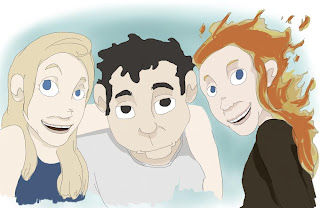 So that’s why Agent, Fiery Fiona and I decided to meet up with K-Bell for a Trip Date, which turned out to be Triple the fun when K-Bell was a NoShow. We chose the best honkey tonk beach town in CA and rented a party house. Unlike vacations with kids, the only amenities we used in the house were 8 wine glasses over the course of the weekend, and the beds. That gives you an idea of where we were headed.

﻿﻿﻿﻿ The beach and bar scenes were just like I remembered from 25 years ago. I spent a lot of time in bars in my day, without truly maximizing my enjoyment. This time I threw caution to the wind. First, I went to a bar alone. Self-conscious I did not feel. Agent and Fiery joined me by and by. And Roy and I enjoyed our Pabst kingers, sucked through a straw. We took a brief respite from the bars and passed out on the beach. When we awoke, a beach wedding was in full swing. We debated advising the hopeful bride and groom of what they really had to look forward to, but decided to hold our tongues and let them live the marriage myth, only to find out the truth for themselves. No, we are not cynical or anything. All the while we were waiting, anticipating the arrival of K-Bell.

When we finally determined K-Bell wasn’t coming, we let down our hair. Got my bellybutton pierced. Fiery held my hand so I didn’t cry. Played pool with some of the nicest barflies on the planet. A really sweet guy professed his love for me, and in return I danced with his toothless friend. I’d vowed I wouldn’t dance, but then I enjoyed it immensely and even made him sweat. Just when things were getting good and beer-goggled men were showering me with flattery and drinks, Agent and Fiery decided it was bedtime. Abrupt transitions are Agent’s specialty.

So we went home and got some cozy sleep. We could sleep easy once we got final confirmation from NoShow K-Bell that he drove 200 miles toward us, then turned around and went home. Yeah, the dating scene is tough these days. We could even call this Triple Divorcees Trip Out…except between us our divorces exceed the number 3.

So this Triplesome is now seeking my next Trip Date. We promise it will be a frolickin' time…do we have any takers?
Posted by Dating Suburban at 11:24 PM No comments:

For single divorced women with kids, dating is really complicated. Schedules, living arrangements – the logistics can be worse than being married. So why not just be really good friends, with benefits? What does this mean, exactly?

I looked up “friends with benefits” on urbandictionary.com because I think I need to learn more about this phenomenon…and there are 37 different definitions. Here’s just some of what Urban Dictionary has to say:

3.       A safe relationship, that mimics a real partnership but is void or greatly lacking jealousy and other such emotions that come with a serious relationship.

4.       When two people are in the stage between friendship and a relationship, often resulting in kissing, etc. Also known as flirtationship.

6.       Two friends with a very casual dating relationship. The benefits can be really good, long, flirty conversations; make-out sessions with no commitment; sex without commitment; etc.

7.       Two fairly close, or very close friends have the hots for one another. They do have some sort caring for one another, but it is not one of a romantic couple.

8.       A man and a woman who don't enjoy commitment like to fool around with one another because they find each other attractive.

9.       When two friends want to flirt, touch, hug, and mess around or more without having to commit or wonder if they are dating.

10.    A relationship between an ex-boyfriend and an ex-girlfriend, or people who are into each other without formally dating, where sex is involved, and the woman wants to be a couple again; until the woman realizes that the man is never going to step up and make a commitment - he just wants the romping without the responsibility. Men can usually separate the physical from the emotional; women usually have a harder time of it.

11.    The cause of sexually transmitted diseases. “Yeah I'm friends with benefits with Suzie, Kate, and Jen. Now I have chlamydia and I don't know from who or who I gave it to.”

12.    Two friends that have an attraction to each other but can't be in an official relationship for whatever reason.

13.    A healthy, fun sexual relationship between two people...until one falls for the other and the friendship blows to pieces. And those two people find themselves worse off than they were before.

14.    The benefits are not exclusive, buyer beware!

Sounds wonderful! Just a notch below divorce. Take someone you really like AND find physically attractive. Remove commitment, obligation, jealousy and voila – you have a relationship just about as void of feeling as a dead skinned cat. And I already have one of those, BTW, so I don’t need another one.

However...were I to pursue this option…readers, please vote on which definition you think I should go for! Your opinion counts!
Posted by Dating Suburban at 11:48 PM 3 comments:

I always like to be prepared to get out of any sticky situation as quickly as possible, if needed. It’s just in my marriage-turned-divorce that I can’t seem to find the exit.

So, about props and dating. One prop I’ve always been fond of is the engagement ring. The better, the bigger (that’s not a mistake, I say it that way). I love my engagement ring. Maybe even more than I loved my husband, and definitely more than he loved me! But I really can’t wear it anymore. Or shouldn’t anyway. It may be cursed. And, I don’t want to make my dates feel like they are doing something wrong in the eyes of the Catholic church by dating a still-married person. (If my divorce never ends, a lot of people will be dating a still-married person!). But my finger feels naked. And this is not the fun and frolicky kind of naked you think of when you think dating.

However, recently I may have had a change of heart on this subject. While shopping in Target with my daughter (a haven for Dating Moms) we stumbled across the best, most coolest engagement rings, for the low, low sale price of $19.99. That’s right, a man could buy your love for under $20 excluding tax. So I decided to buy myself some love that fine day at Target.

This ring will actually come in handy for dating – to repel or reject potential dates I don’t want – without having to say a thing! All I’ll need to do is flash this handy diamond (maybe is cubic zirconia?) and presto – the date-seekers are gone. Or at least the above-board ones. Some guys only go for the married women – you know who you are.

I noticed during my marriage that flashing the ring worked flawlessly. Or maybe I just looked so haggard, tired and depressed that no sane man wanted to try me. Now that I look young and sprightly again (or maybe I should say feel, not look) I will need this Wonder Twins powered ring. The men that are flocking to me need to be controlled. I will use the ring to stun-gun the bad ones. And I will deftly remove the ring when a desirable date is in the nearby vicinity.
﻿﻿﻿﻿﻿﻿﻿﻿﻿﻿﻿﻿
I especially like to dangle my ring-infused hand out the car window, alternately removing and adding the ring as needed while crusin’ the suburban strip.
﻿﻿﻿﻿﻿﻿﻿﻿﻿
﻿Did I mention I also bought the matching wedding band at Target too – only $19.99!
So in the event you want to marry me, you don’t even have to spend a dime!
﻿﻿﻿﻿﻿﻿